From the High Street which is the spine of Lincoln, descending the steps to the left of the High Bridge Café, I walk west along the river bank, under the Wigford road bridge and see the now very familiar Brayford Head on the right hand side. 211 paces all together.#

There is a seating area with three benches looking outwards towards the Brayford Pool. This seating area is an uneven quadrilateral or tetragon, paved with bricks, and enjoys a direct relationship with the water.

A sharp breeze off the Brayford drags an air from the west into the city (the lower-case devil rides on the wind at many points in Lincoln especially around the Cathedral).

An old proverb says, “The devil looks over Lincoln.” There are myths which vary in detail but all have this one detail of the ‘devil over Lincoln’ in common. Also, circa 1256, some monks in Lincoln “deduced a proverb to express the ill aspect of envious and malicious men at such good things they don’t like: ‘He looks as the devil over Lincoln.’” Lincolnshire Folk-Lore, Gutch/Peacock. Folk Lore Society, 1908.

Not all devils are the same and it is this devil, the surveilling, which flies on the wind towards the east end of the Brayford Pool today.
The symbolic devil was a necessary invention; thus it is said, “for good to thrive, the devil must live.” Anon

Brayford Head is the site of what was once the main river crossing at this point in the city. The Lincoln Townscape Assessment tells us:’The narrowing of the channel and bank walls of the former Brayford Swing Bridge, built by the Great Northern Railway in 1868 and removed in 1972, can still be seen beneath Wigford Way at Brayford Head.’
(Lincoln Townscape Assessment, Brayford Inherited Character Area Statement. City of Lincoln Council, 2008)
There is still evidence of the Swing Bridge today.

‘Thence to Witham, having red [read?] there
That the fattest Eele was bred there.’ Barnabee’s Journall.

[Note: Importance of the waterways as a food source.]

The waterways here were once thoroughfares; important trade routes and routes for the exchange of news, information and gossip. The River Witham fed by the Brayford Pool at Brayford Head connects Lincoln with Boston in the south of Lincolnshire where the Witham connects with The Haven and flows into the sea at The Wash. The Wash is to England as The Bite is to the fictional continent of Westeros. 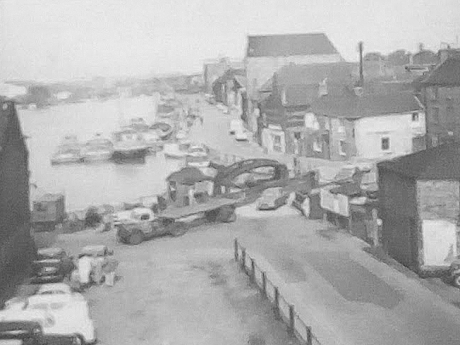 Image from information board at Brayford Head South: “The swing bridge seen in 1961 from Brayford East, looking down the waterside past where you are standing now.”

Today is the final flight of the year for the Hurricane Bomber, now circling over the city. Lincolnshire is sometimes called Bomber County which is also the name of a beer made by Tom Wood’s, a brewery based at Barnetby, in the north of the county, in the wapentake of Yarborough. The City of Lincoln itself was in the wapentake of Lawress, itself within the part of Lindsay. Wikipedia: “According to Whites 1856 Lincolnshire, Lawress Wapentake was one of the south-western divisions of the parts of Lindsey, in the Deanery and Archdeaconry of Stow, and consisting of the East Division and the West Division.”

Afterword:
In his A Tour through the Whole Island of Great Britain (1724), Daniel Defoe writes of Lincoln:
“The situation of the city is very particular; one part is on the flat and in a bottom, so that the Wittham, a little river that runs through the town, flows sometimes into the street.”

Tract:
An area of land.
A publication, a brochure.

For a hard copy of any Little Tracts, email Jamie Crofts: kiosk4sound AT gmail DOT com