When visiting the bridges on 23rd January 2019 the feeling came to me that something astonishing happened here. That day I resolved to discover what this was with the intention of speaking the unspeakable.

By 23rd February of the same year I was able to reveal the result of my enquiry. It tells a story of two would-be lovers with much in common…

Two aspiring lovers arrange to meet at 3.30pm on the Holmes Bridge, on the south footbridge to be specific. Smith has an inverted sense of direction and is waiting instead on the north footbridge. Neither has a strong sense of self worth. Both Smith and King arrive from different directions, west and east, and both leave in opposite directions feeling rejected. They both return the following day at the same time and both choose to try the other footbridge. Again, rejection felt but not intended.

The three bridges at Ropewalk and St. Marks are at a site of transition and transformation:
To the north, completely urban. Commercial. Industrial. Hard bankside walls. Brick and concrete. Water, dark beneath the bridges. Green and grubby. To the south, completely pastoral: Verdant. Witham flowing quickly. Soft riparian banks.

On the third day, the 14th of April 2013, King returns to the south footbridge and leaves a padlock attached to the grid fencing with which the sides of the bridge are fitted. Written on the padlock are the words: “Smith and King 21/4/2013?”. When King returns one week later in the hope of seeing Smith it seems now that they are destined to meet. King attributes this to the padlock, serving as a talisman. 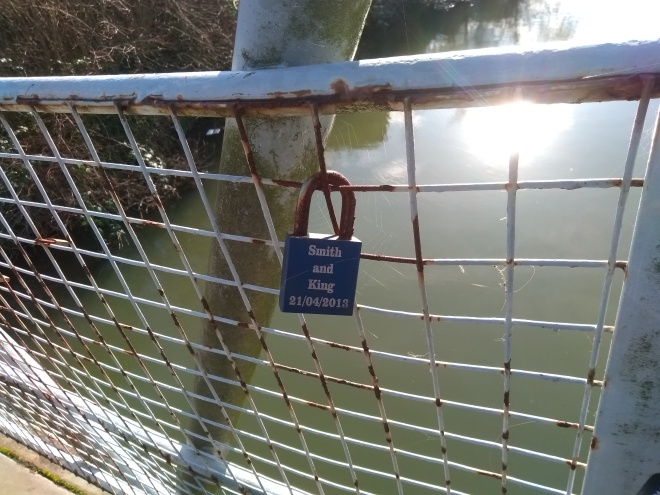 Both do indeed meet that day, at 3.30pm. The question mark is scratched away from the padlock and destiny it seems is fulfilled. And yet, that day, they discover that each is the other. Many partners, lovers, wives or husbands will talk of being as one, but with Smith and King this was more than figurative. Smith is King and King is Smith. Both are truly one. They are each the embodied doppelgänger of the other, hence the intensity of their urge to meet.
At 3.31pm that day, both simply merge. They decide on Kingsmith as their new identity and they leave the scene with a gentle disagreement about the direction to take.

Lincoln Townscape Assessment gives some context:
There was a narrow bridge carrying St Mark’s Street over the Upper Witham to Ropewalk by c1817 (Marrat’s Map) (Herridge 1999, 5019). The 1888 OS map shows a wider (c.6.25 m) bridge, perhaps the present one. It is a single-span flattened arch in blue brick and the roadway is humped. The history of the bridges in this location is the history of the development of the Holmes themselves and the different phases of construction of the bridges will chart the exploitation of this area in the Industrial Era.

A ropewalk was a long straight narrow lane, building, or a covered pathway, where long strands of material were laid out and then twisted into rope. A standard British Navy ship rope was 1000ft so a ropewalk was very long and due to the length of some ropewalks, workers may have used bicycles to get from one end to the other. Powerful machinery was used to twist the rope and the mechanism travelled on rails as the rope twisted and so shortened.

The phenomenon of the Doppelgänger:
I can speak on this matter as I have lived experience.
In the mythology a Doppelgänger is a malevolent double; a person’s negative self or inverse. But this is not necessarily the case. It is possible that the Doppelgänger is a benevolent double, a twin or simply a mirror image. The mythology also tells that meeting one’s Doppelgänger will augur the moment of death, or even to cause the death.
What many people don’t understand is that both person and Doppelgänger are real. The Doppelgänger is not a ‘spirit double’, a ghost or supernatural entity. Both person and Doppelgänger are equally real, such that we can dispute which is the ‘original’ and which is that ‘double’.
For both to meet does have its risks, one of which is a potential merge as we find in the story told here, but by no means does every encounter have destructive consequences.

This is a MICROtract, part of MICROcities. Jim Simm is an unreliable narrator.

Tract:
An area of land.
A publication, a brochure.